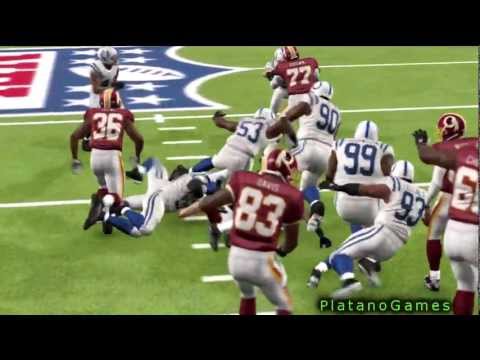 Full Game CPU Simulation + Super Bowl XLVII Information in description! Super Bowl XLVII, the 47th edition of the Super Bowl and the 43rd modern era National Football League championship game, is scheduled to be played in 2013 at the Mercedes-Benz Superdome in New Orleans, Louisiana. The game will be held on February 3, 2013. Therefore, the 2013 Mardi Gras calendar in Orleans Parish will be changed. Parades scheduled for February 3 and before will likely move ahead one week. The same occurred in 2002 when the September 11 attacks caused a one-week delay in the 2001 NFL season, resulting in Super Bowl XXXVI falling within the Mardi Gras parade calendar.The game will be carried by CBS and will be simulcast in Canada by CTV. CBS plans on charging a record high US $4,000,000 for each thirty-second advertisement.General Motors has announced it will not advertize on the game, citing the advertising costsMadden NFL 13 is an American football video game based on the National Football League, published by EA Sports and developed by EA Tiburon.EA's Chief Creative Officer Richard Hilleman said that defense will receive various changes in mechanics and controls, being one of the first known new changes in the game. The cover features Calvin Johnson of the Detroit Lions. The game will be released on August 28, 2012.This year, CBS' number-one commentary crew of Jim Nantz and Phil Simms will anchor the game in the broadcast booth. Nantz and Simms appear in an in-booth cutscene before the game that includes stadium-specific backgrounds. EA is introducing 200+ new cutscenes between plays, before games, and more. These cutscenes are inspired by broadcast TV presentation. Replays are also being overhauled for more dramatic effect. Halftime features a new stats overlay, but there is no halftime show. The game contains all the new Nike uniforms and alternates on the disc. Some of the uniforms may have to be unlocked via a code as they are released in real life. Lighting changes based on the time of day occur per play instead of just at quarter breaks. Madden NFL 13 features the improved high dynamic range lighting and motion blur.Over 82 hours of commentary, to keep the audio new and different each time, with over 9,000 unique lines. Most of the lines are ad-libbed and Nantz and Simms regularly have interactions and comment on what is actually happening on the field. In addition, an approx. 15-16 track, fully orchestrated soundtrack, also composed by O'Malley, will replace EA Trax for the music on the menu screens and other game modes. Partnership with NFL Films to get exclusive sound clips, such as QB cadences, hits/tackles, and group chatter, only available in Madden NFL 13. New crowd noise, recorded with 24 microphones, opposed to 4 microphones in previous years.Kinect is included on the Xbox 360 console. "Tebowing" will be included in the game. Connected Careers: Combines Franchise, Online Franchise, and Superstar modes as well as historic players into one gameplay option. It will also make it no longer possible to import draft classes from NCAA Football.